The details of Grana reggiano cheese are as follows. 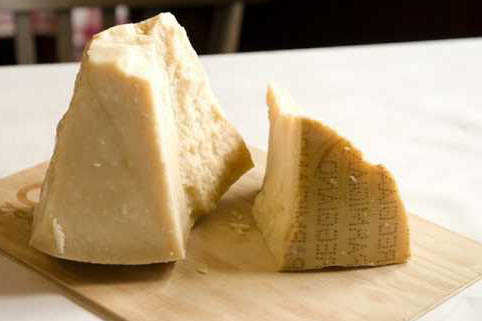 The smallest amount of milk needed to make one cheese is 350 do 400 kg, but it often comes to 1000 kg. If one milking is not enough, these are left for morning and evening milking and processed together the next day, having previously collected approx 50% cream, so that after mixing, the milk still contains 2 do 3% fat. The stand-up takes place under similar conditions as in Switzerland, i.e.. in shallow, tinned bowls, which are set up in cool and airy rooms.

The collected milk is poured into the boiler and, after mixing it thoroughly, its acidity is determined in order to calculate the amount of leaven needed, which still needs to be added, for guidance, how to guide further processing, that the contents of the boiler would be sufficiently angry. Simple and pure leaven is used. Simple sourdough is an acidity made of Swiss model 55 do 68°M. So much of it is added, that the milk that is seasoned with it will have 18 up to 22 ° C acidity, which is usually achieved by adding it in quantity 0,5 do 2 liter of 100 kg of milk.

When using leaven from pure cultures, the instructions of prof. Gorini as follows. Since it will cool down to 40 ° C after making the cheese, it is seasoned with the imported pure culture and 1% peptone and matured at 37 to 40 ° C by 20 do 24 hours. Such a leaven contains the most viable microorganisms after one day, later - it weakens. So it should be used after the expiry date at the latest 36 hours counting from seasoning it with pure culture. Where there is no short circuit, there, you can use centrifuged and properly sterilized whey as a medium. Pure leaven is used only 0,5 liter of 1000 liters of milk, and that's before the rennet is poured in.

The milk is then heated to 33-35 ° C and renneted. Coagulation continues 20 do 30 minutes. Low-fermented milk often coagulates even longer, that it would be better at this time, especially in winter.

A medium-hard curd is initially cut roughly shallow, wooden plate, and then chopped it with a pea-sized or smaller grain cutter, depending on the properties of the milk. Stirring continues, until the grain is properly dried in its entire volume, which is assessed in the same way as in Swiss cheese making, i.e.. whether the grains are dry to the touch, and when squeezed, they do not merge, but they can be rubbed again. As this moment comes, the contents of the boiler are left through 8 do 10 minutes alone. Shorter breaks are also required during processing, if the slices are too soft and delicate. Cutting and mixing until the break, i.e. pre-treatment takes approx 30 minutes.

After the main break, the grain is thoroughly spread and reheating begins. Only then does it give up 1 do 4 g of saffron on 100 kg of milk according to its natural color. Saffron is ground in whey and poured into the cauldron. Undoubtedly, it is more rational to dye saffron with alcoholic extract before renneting the milk..

It is very important to determine the acidity of the whey during this period, because according to this we judge the course of maturation of the boiler contents and we heat it up accordingly. The specific acidity of the whey at the start of reheating is 13 ° M. If so much is found, this heats the cheese mass continuously slowly to 55 ° C over a period of approx 20 minutes. If there is less, e.g.. only 12 ° M acidity, then it is heated only to 42 °C, removes the cauldron from above the fire and stirs it until the acidity of the whey reaches 13 ° M, which is usually achieved after 40 do 50 minutes from cutting. Then the boiler is put on a fire and it quickly heats up to 55 ° C. The temperature used during reheat varies, as in Emmental cheese making. Some even heat up above 60 °C, which should be considered a harmful procedure for reasons already known to us. Indeed, cheeses that are so highly heated do not ferment, are dead.

During reheating, it is necessary to closely monitor the degree of dryness of the cheese mass. Properly processed grain, squeezed in a handful, it breaks under light finger pressure and can be rubbed well while maintaining proper adhesiveness. The test in this respect is the same as in Emmental cheese making. As this moment comes, mixing stops, so that the thickets fall to the bottom and concentrate here into a lump.