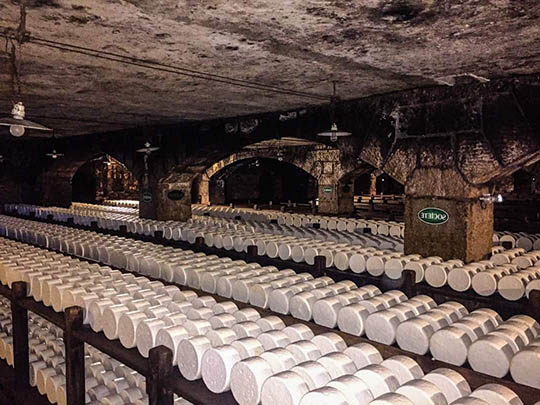 Characteristics of the series. The cheese mass is quite soft, paying attention to it, that the raw cheese undergoes uninterrupted lactic acid fermentation at a convenient temperature during the first maturing period, e.g.. 18 do 20°C. The noble blue mold Penicillium glaucum var is inoculated into the raw cheese mass.. roqueforti, which breaks down proteins and splits fats. Its operation is due to giving the cheeses their characteristic taste and aroma. These bacteria are very viable. Therefore, their development must be inhibited by the low temperature of about 4 ° C and limiting the access of air oxygen. Otherwise, when it comes to facilitating the development of this mold, channels for air are hollowed out in the cheese. Apart from Penicillium glaucum, they act in cheese and influence the course of maturation as well as other microorganisms. Roquefort (France)

Roquefort is a small village in the Aveyron department, built on the slopes of Mount Cambalou, part of the Larzac flat hill. It has been famous for many centuries for making excellent sheep's cheeses and natural caves, in which they mature. There are gaps and gaps deep in the rocks, which arose in ancient geological epochs, due to the sliding of huge rocky layers on the clay substrate. A huge reservoir several hundred meters long has formed between the remaining hill and the embankment part, about width 60 me 30 m deep. Rainwater seeps into its depths and penetrates air from above, which, cooling down and saturating with moisture, falls to the bottom. From here it flows through wet and cold crevices as far as the depths of the embankment part, full of recesses and abysses, which were set up as cheese maturing rooms. The used air escapes from the basement with fans. The air current is stronger and cooler, the hotter and drier the air outside is and the wetter and longer the gaps are. In winter, when the air outside is cooler than in the cellars, a current is created in the opposite direction, it is from the bottom up like a chimney, which causes some difficulties, because then the cheeses dry up. In this case, the airflow in the undesirable direction is stopped, closing the cellar doors tightly.

Larzac has always provided the greatest amount of sheep's milk for making roquefort cheese. It is a plateau of height 700 do 900 m, covering the area of ​​more than 100 000 ha. They are generally sad areas; there are gray limestone rocks everywhere, only from the cracks grow stunted trees and wretched grasses. There are few more fertile places, and these also have an inexhaustible amount of stones. The soil and subsoil are permeable, so when heavy rains fall, the pastures are delicious, but in dry weather the vegetation worsens. Only in a few and tight valleys is the soil fertile, it can also be irrigated with the help of many springs gushing from the mountain slopes. Alfalfa is sown here, esparceta and set up artificial pastures. The climate is harsh, early winters and long hot summers. In such conditions, sheep farming is the basis of the farm. Only in the more fertile valleys a small number of cows are found. Therefore, over the centuries, efforts were made to increase the milk yield of sheep of the local Larzac breed mainly by means of selection, proper nutrition and milking, so that the average milk yield is now 60 liters per year, and it varies within limits 30 do 100 liters, which corresponds on average 18 kg of processed raw cheese counting 5 do 4,5 liter of 1 kg will be.

The sheep farm falls on December and January, and the delivery of milk to the cheese dairy begins in February, and ends in mid-August. The chemical composition of the milk of the Larzac sheep is as follows:

The sheep farm falls on December and January, and the delivery of milk to the cheese dairy begins in February, and ends in mid-August. The chemical composition of the milk of the breed sheep larzac is as follows:

Even before 60 years were making cheese roquefort at home only on farms and sold unfinished to cellar owners, who nurtured the cheeses until they were completely ripe. Currently, the hosts deliver milk to numerous cheese houses, which arose here. Within 70 do 80 km are about 350 in slight fromlegends (2 do 3 km), which facilitates the delivery of milk. The businesses in Roquefort extend beyond the Aveyron department, which he delivers 75% production, but also the departments of Herault, Tarn, Lozere, Gard and Corsica. Thanks to these cheese dairies, small owners who had even a few sheep, they can use their milk on an equal footing with the larger suppliers and contribute to the development of the great Rocforce industry. Anyway, the factory product is not only better and more uniform, but still much more advantageous than the home one, that you get 2% more cheese and you save approx 15% labor expenses. The purpose of the cheese dairy is to collect milk from the nearest neighborhood and process it into raw cheese, which, when it drips, shipped to the cellars in Roquefort. The most important task in the production of roquefort cheeses is not to make the raw cheese, but on proper care during maturation. Therefore, only in Roquefort will we find the right equipment. On the other hand, cheese dairies that only process milk are modestly equipped. They usually consist of three or even only two rooms, namely, in one larger one, acceptance is also taking place, heating and renneting milk, curd processing, shaping and dripping of raw cheeses. The temperature is kept constant in it 18 do 20°C. Second room or basement, which stores the drained cheeses until they are shipped to Roquefort, must be cool (10 do 12°C). Therefore it is usually located on the north side. Larger cheese dairies have up to 5 room, for example, a separate reception room, the conversion room, heating plant, room, in which the cheeses are dripping, basement. The floors are usually cement-based, carefully whitewashed walls, water in abundance necessary to maintain neatness. Rooms, in which cheese production and dripping takes place, are usually heated by heaters powered by hot water or steam.