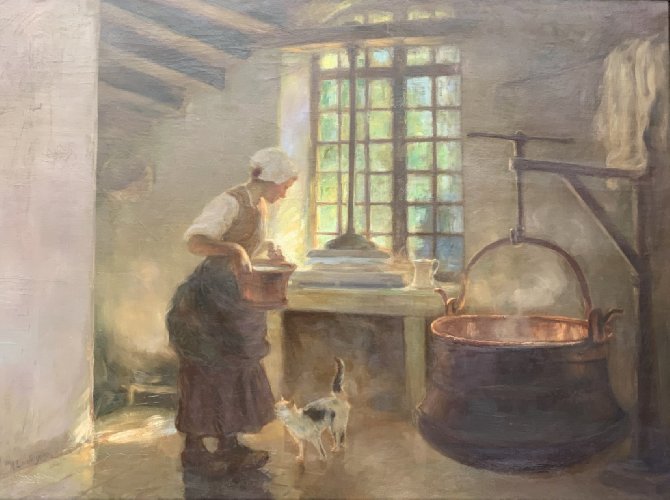 Purposefulness in planning. An efficient cheesemaker can work fruitfully, even in primitively furnished cheese rooms. For large-scale processing, the primitive equipment in the cheese dairies is insufficient.

A deliberately built and rationally arranged cheese shop brings many benefits. First of all, it simplifies and saves work. This is usually the cost of cheapness and the return of the contributions made. It is up to a purposefully arranged cheese house to maintain the necessary neatness without any special effort, which means reduced production damage due to microbial contamination.

Principle, which should be guided in building and arranging a cheese dairy, sounds short: albeit poorly, but on purpose.

The location and arrangement of the cheese dairy should not be schematic, because apart from local conditions, often separate conditions, the requirements and needs resulting from the size and direction of the processing must also be taken into account. Hence, a large cheese factory and a small cheese factory are located and arranged differently. The Emmental-style cheese dairy differs significantly from that of the Dutch cheese dairy, and even more so than the French, doing a lot of little things, for example in the form of small cheeses with mold growth. We will get many similar examples, and their diversity is also influenced by factors such as: climate, organization of milk delivery, production of various types in the same cheese factory, as well as communication with the butter shop, etc..

Here we can only deal with general guidelines for the construction and equipment of the cheese dairy.

Choosing a place. The cheese shop should be located in a place convenient for most milk suppliers, dry and raised, so that sewage can be drained easily and cheaply. The lack of an efficient sewage system is no less a problem for the cheese dairy than for the butterhouse. The construction area should be so chosen, so that further expansion is possible in the future, convenient inns and stops, and also to avoid conflicts with the immediate vicinity of building laws.

The most suitable substrate is dry clay or sandy not only because of the foundation, but also because of the shops, that is, cellars, which are poorly built in waterlogged ground and difficult to protect from damping, which destroys the ability to freely regulate their moisture. It is undesirable to be adjacent to barns, dunghill, puddles, no places at all, which are the habitat of microorganisms and fumes harmful to the cheese industry. Road dust is also harmful, therefore, the place for the cheese factory should be chosen a little off the road.

Sufficient healthy water at the site is a prerequisite. Is there water, how much and what, you have to find out about it, before the construction works begin.

Sewage. No less important, than choosing a place, it is appropriate to plan the discharge of sewage and to use appropriate devices, and this is due to the danger of poisoning the water of rivers and streams. The easiest way is to connect to the municipal sewage system. Other ways, like clarifying wells, mechanical devices, irrigation, biological, etc.. they often fail as not reconciled with the size of the treatment and the variability of the inflows, both in terms of quantity and chemistry. The process of rotting of the contents of sewage fluids in biological chambers is often hampered by an excessive amount of milk sugar, producing an acidic environment, whereas rotting of protein deposits requires pH 7,4 do 7,6.

Building. The basis of a cheese-making project should be a thorough knowledge of all technical conditions, as well as economic, in which the future facility is to develop.

However, it is difficult to demand from a builder, to be thoroughly familiar with the design of the construction of the cheese dairy. Therefore, the cooperation of the builder is desirable in the preparation of the cheese-making project, fitter and cheesemaker, let alone that, that experts appointed to do so should already consider the dependence of the future enterprise on economic conditions.

It should even be so, when it comes to a small processing cheese plant 2000 do 3000 l of milk a day. Foreign countries have institutions established for this, where outstanding specialists work. Their task is to evaluate the finished projects.

It happens, that the construction plans are provided by companies that sell dairy machinery and equipment. It is even more difficult to expect professional knowledge of all local conditions from them.

The sizes and layout of the rooms depend on the expected sizes and types of conversion, finally - from purposefulness and workflow. Pay attention to this, that the planning of underground premises, shops, that is, the cellars in the cheese room is just as important as the design of the rooms above ground, for example greenhouse etc.. Meanwhile, underestimating the importance of cellars makes, that in most cheese dairy projects, the arrangement of cellars is not a matter of thought, but by chance. The ground floor is being designed, and the cellars are not taken into account and thus the crippled cheese-making is erected. No schematic plans should be considered, but to proceed from this reasonable assumption, that each cheese dairy is a kind of separate creation which cannot stand imitation. Next to the word "basement” let me introduce the word 'shop”, which originates from the vault and is widespread to this day in the original non-transferable sense in Poznań, in Pomerania, Prussian Mazovia and other parts of the Polish lands. In Czech, also "shop”. The word is used figuratively instead of "stall”. In the former Polish language, the basement was a shop, in which the beer was stored.