Can dumplings be steamed?
I've been asked a lot lately: is it possible to cook steamed dumplings?
Dumplings are an amazing dish, present in one form or another in every national cuisine. We all love them. Sometimes we even get bored. But we usually cook in the old fashioned way – in boiling water. No wonder, because on each package of ready-made dumplings it says: Boil the dumplings in boiling water or fry in a pan.

Probably in every European and Asian national cuisine there is a dish similar to dumplings. They are prepared in their own way everywhere, on different ways, however, expert opinions are unanimous: it's best to do it by steaming. Products cooked with steam treatment retain most of the nutrients and do not lose their attractive appearance, that's why our housewives more and more often prepare meals in the steamer. Cooking dumplings in a steamer it's a piece of cake. This is not only the most correct and delicious way to prepare them, but it also has a number of advantages: the products do not boil over, do not stick together, and the juices and spices from the minced meat do not run off into the water. When we cook dumplings in a steamer, we don't think about the timing of this process, we don't make sure, that they are well cooked etc.. The device does everything by itself.

You just have to decide, or to cook homemade dumplings, whether to use frozen dumplings from the store for this. In a steamer, these two kinds of dumplings produce two different results. Ours are more delicate and even tastier. But frozen from stores is a faster preparation option.

In any case, each dish has its own nuances of preparation, and the dumplings in the steamer are no exception. You can choose any recipe for them, to your taste. Much depends on the spices, meat used, the size of dumplings.

Because, how to cook dumplings in a double boiler, depends on you, but a few recommendations from experienced chefs will not hurt:

– if you cook dumplings yourself, then knead the dough thoroughly, it should not stick to your hands and table;

– any meat can be used for minced meat, and also mix in different proportions. But if the meat is dry, add a little lard to the minced meat;

– finished products are placed in the steamer in one layer at intervals, so that the steam circulates freely between them;

– depending on the size of the dumplings, this process will take 15 – 20 minutes;

– if you cook store-bought or your own frozen dumplings, extend time to 25 – 30 minutes;

– for flavor and aroma, add herbs and spices to the water;

– in the top bowl of the steamer, the food will cook correspondingly more slowly, in the bottom bowl – faster;

– after cooking, the dumplings are immediately laid out on plates;

– salt it, fuck, add different sauces to the plate, when the dumplings are hot;

– if the dumplings are spread over the plates, they will be served to the guests later, cover them with lids, they will keep their appetizing qualities for some time and will not cool down quickly.

You can cook dumplings in a steamer! 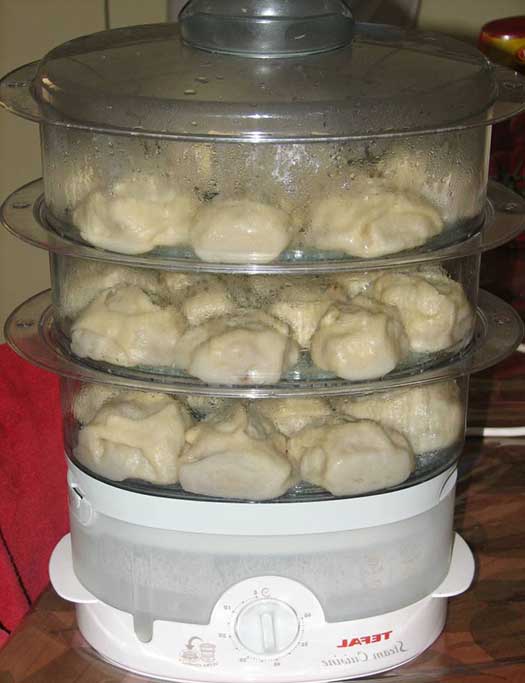 Not only is it possible, but I think, that this is the most correct and delicious way. The dumplings are not soft. Don't stick together. Minced meat juices and spices do not pour out. But, as always, there are several nuances.

Lubricate the surface of the steamer with vegetable oil and arrange the dumplings in a single layer. Cook through 10-15 minutes. Or at the time specified in the steamer's manual.

Do you know, that Uzbek dumplings – manti – are steamed according to a traditional recipe. For this there are even special pots. 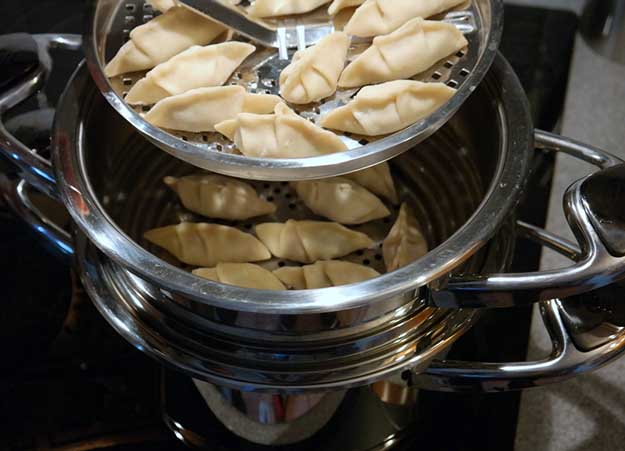 If you don't have a steamer, you can "make" it yourself. Fill the saucepan with water. Cover the pot 2 in layers of gauze and tie with string, firmly pressing down on the gauze. Here is a simple steamer. 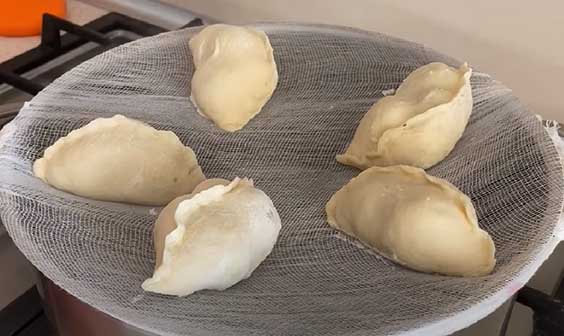 Cooking steamed dumplings in a multicooker – the rice pot.

I smeared the steaming basket with slightly melted butter, so that the dough does not stick to the surface. I put the dumplings in one layer. Then I boiled the water, I poured a glass of boiling water into the multicooker bowl. I set the basket down, I closed the lid and turned on the steaming mode. In my oven it is called "normal". I was counting around 15 minutes. Probably, in some models of the multicooker, automatic shutdown is provided, as soon as the dish is cooked. But mine didn't shut down, so I determined the degree of readiness of the dumplings myself: I looked at them three times and felt a fork. The whole process only took 15 minutes. What is the advantage of steaming dumplings for such unrepentant lazy people as me? Fact, that you don't need to reapply, As they say, get up and stir something. It's just not necessary at all. Dumplings are cooked without water, and you shouldn't be afraid, that they get stuck or boil over. At the same time, the surface of the basket does not heat up like a frying pan, and burning the dumplings is also completely out of the question. When the dumplings are ready, I put them on a plate and add butter that melts on the hot dumplings. Now you can dine in the best traditions, watching a good movie. I have to say, that I was able to prepare some intermediate version of this not very healthy for the figure, but such a tempting dish: not fried, but also not boiled in water. Plain steamed dumplings. 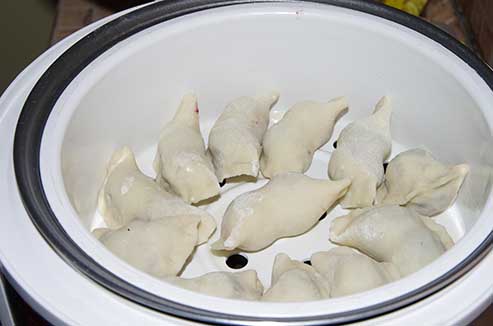 We can too steam the dumplings in a regular strainer. We put water into the pot, at the top of the pot, put a large metal strainer and place the dumplings on it. We cook approx 15 steaming minutes – from the time the water was boiled. Healthy and delicious dumplings. 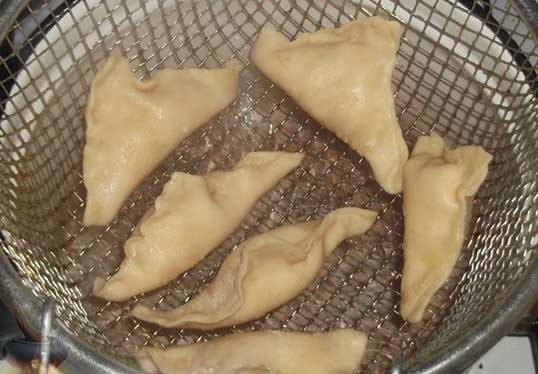 There are also special bamboo wooden sieves for steaming. Place such a bamboo steamer on a pot, put dumplings on it and steam it. We can put parchment paper or gauze underneath, so that the dumplings stick to the steamer. 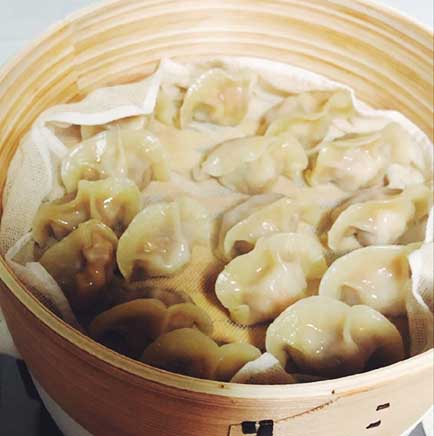 Cooking dumplings by steaming on a metal insert inserted into the pot.

We can buy a metal steamer insert. Price approx 20 PLN. Put the insert into the pot, pour a little water, (ok 1-2 glasses of water) we lay out the dumplings and from the time of boiling the water – we cook dumplings under cover of approx 15 minutes. 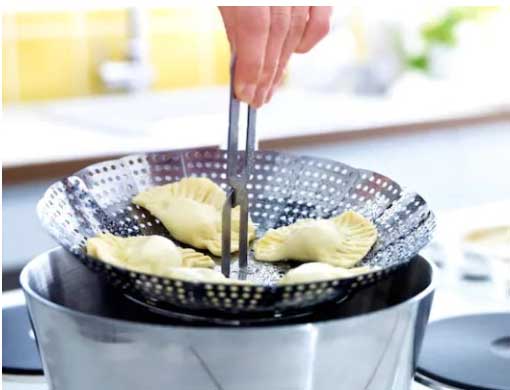 If someone has a thermomix, he can steam dumplings on the varoma appetizer. Grease with varome butter , arrange the dumplings. Fill the mixing bowl with water, put the varome in place and steam it for approx 20 minutes. 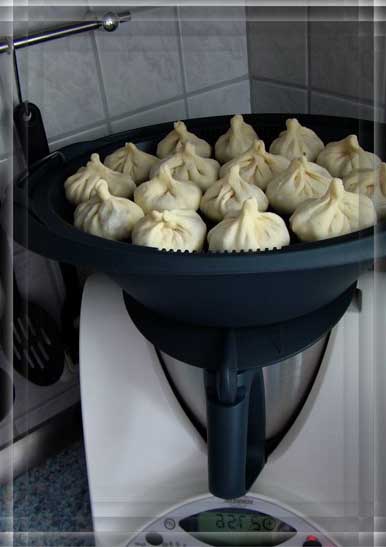