The purpose of pressing is to concentrate the cheese slurry into a cohesive lump of the appropriate shape and to remove excess whey from the raw cheese.. Pressing reduces the water content of the cheese to a relatively small extent. By pressing the cheese, we squeeze almost only the whey out of it, which is between the grains, however, not much contained in grains can be removed even with strong pressure, excluding the rind and the nearest layer adjacent to it. Therefore, we regulate the water content in cheese mainly with treatments, we met previously.

Certain types of hard cheeses are pressed and usually combined with shaping, that is, shaping in order to give the cheeses the right shape, usually a prism, grinder, a higher cylinder or sphere. The shape of the cheese, more precisely, the ratio of its surface area to its volume, is not without significance in the course of maturation and ease of maintenance.

The top-ripened soft cheeses are given a relatively large surface area, to facilitate the growth of microorganisms, and hard cheeses matured in their entirety and independently of surface microorganisms, it is given the form of lumps, which protects them more from drying out.

Volume and size may have yet other effects. Emmental type cheeses due to their size (50 do 150 kg) they keep high temperature under the press for a long time, which they took out of the cauldron 55 do 35°C) and thus create favorable conditions for the development of heat-loving bacteria.

Wooden pieces of cheese should be used, and if it is impossible, made of well-bleached sheet metal, for iron and copper compounds blacken the cheeses.

We will learn about the different types of dough materials in the detailed cheesemaking technique.

The cheeses should be drained and pressed at a temperature of approx 18 °C. This is because the whey does not drain sufficiently at low temperatures, and the first important transformation of milk sugar in cheese is slow, or it is completely inhibited. Conversely, too high a temperature can support turbulent fermentation, and in the summer - dangerous puffiness of cheeses.

For removing the cheese slurry from the cauldron, wrapping cheeses under the press, for straining, etc.. mesh scarves made of hemp fabric that let the whey through are used. The density of the fabric is appropriate, if the weft and warp form a grid of approx 4 mm². Smooth, strong and slightly thicker scarves are woven from double-twisted thread, thinner, but more hairy and weaker, from single-twisted yarn.

Shawls and canvases perfectly smooth and strengthen the skin. Washing them requires attention. The scarves are usually soaked in dissolved protein, which solidifies in hot water and creates a kind of hard finish. Therefore, they must first be rinsed in cold water, and then wash it in hot, otherwise they will stiffen and lose their ability to absorb the whey, they do not stick well to cheeses and wear out quickly due to brittleness.

Pressure, which the cheese press exerts should be uniform and adjustable, because, due to excessively high pressure immediately in the initial shaping period, parts of the cheese mass go out of the mold, especially when it has not been matched, or penetrate the scarf, that it is hard to detach from the cheese. In addition, a skin that is too hard is formed immediately, which inhibits the drainage of whey. So initially, when the cheese mass is not yet properly bonded, the pressure exerts much less than when it is bonded.

The required pressure force for different species varies and depends not only on the size of the cheese, but also from the pressing period. The pressing period for individual species lasts from several to several dozen hours. For weighing Emmental cheeses 50 do 150 kg pressure is applied 15 do 30 kg in 1 kg of raw cheese, to Edam weighs 2 kg pressure 20 do 30 kg, but lasting much less. Overall, the pressure should be the greater the larger the cheese and the shorter the pressing period. Unfortunately, there are no scientifically justified standards in this respect, but only hints, which are the result of practical experience. According to the laws of physics, the pressure should be adjusted to the size of the surface and the period of pressure should be adjusted to the consistency of the cheese.

In case of, when more cheeses of the same type and size are formed, you have to pay attention to it, that each piece is subject to the same pressure at the same time. Otherwise you will get differently perforated cheeses or one will be blind, others with the correct meshes, which is often found in Lechic cheeses, Edam, etc.. coming from the same war. 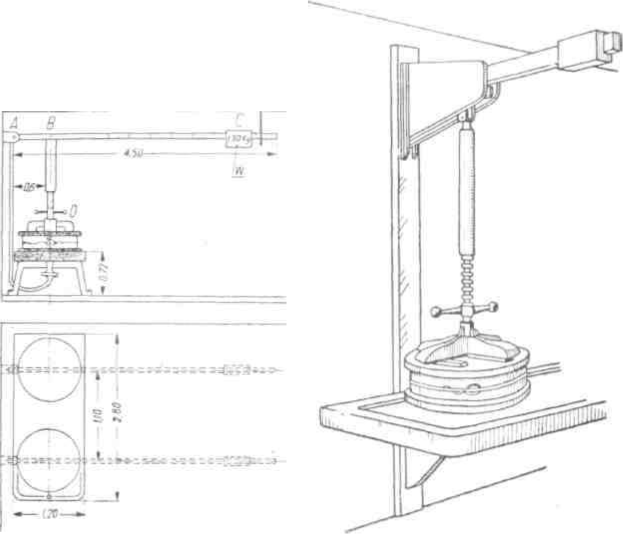 Small cheeses are placed next to each other or in piles under the press. In this case, you have to keep this in mind, that two cheeses placed side by side need twice the pressure, than the same cheeses stacked on top of each other.

Presses should be arranged like this, so that they work continuously and that the pressure force can be freely adjusted. In this respect, they make the conditions and are convenient to use Schatzmann and English presses. Simple, single-arm Schatzmann presses are still used for Swiss heavy cheeses. The downside to them is this, that they take up a lot of space. The pressure is regulated by a weight weighing approx 150 kg.

This type is currently being replaced by practical presses with folding levers. They take up little space.

To them are similar in terms of the connection of the levers of the English press. Instead of one sliding sinker, they have more to add or remove.

Let's calculate the pressure using the example of the Schatzmann press, where we will denote: A = axis, B - resistance point, C = point of force (load). W = weight in kg, AB = resistance arm = 60 cm. AC = arm of force (load) = 420 cm, x = pressure. Zatem moment oporu (pressure) consists of the product of x : AB and according to the law of physics = moment of force (load) evilto the wife by the product 150 • 420, therefore x

that is, the pressure is 1050 kg, not taking into account the pressure caused by the weight of the iron lever, which weight at the profile 15 cm is approx 600 kg.

Tables for heavy presses should be made of thick oak or larch logs pulled through with iron bars. The edge is a grooved whey drain.

The press punch should press the center of the cheese in exactly vertical position, otherwise the cheese will be uneven.

Frequent repositioning of the press punch is detrimental, especially at a later stage, because it shifts and crushes the inner layers of the cheese already combined, which has a detrimental effect on the cohesiveness of its flesh.

Some cheeses often have to be turned under the press, especially initially. Some stay underneath it unturned. Whether the pressure lasted long enough and to the required degree, The best way to know the cheese maker is the look and feel of the cheese. When properly squeezed, it acquires a yellowish skin, and it feels dry to the touch. A wet cheese with a white or gray appearance indicates, that it had not been ironed properly.