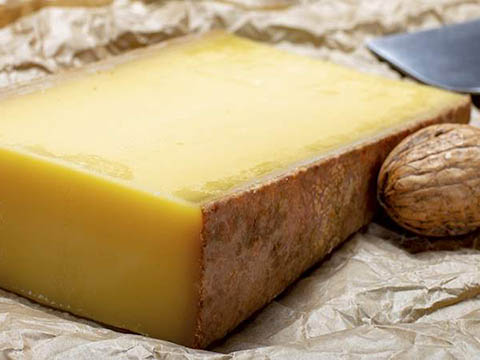 Characteristic. A cheese maker wanting to make hard cheeses, ripening immediately in the whole mass, uses a fairly large reserve of funds. Some of them are physical in nature, some of a biological nature, and some of them specific, separate features of products.

The most common means of obtaining a cheese mass in the future that will easily release an excess of whey and milk sugar is to rennet the milk at a temperature of 33 do 35°C, short periods of clotting, cutting the curd into fine grain, long mixing, ironing etc..

The biological factors include the culture of bacteria and the influence of various temperatures on their selection.

In the period of caring for Emmental cheeses, there is a split into new types, mainly due to the higher or lower temperature used during maturation..

Even at the beginning of the 19th century, Swiss vertebrate cheeses were not as varied as they are today. Initially, they differed from each other mainly in the size depending on the amount of milk, which only mountain cheese dairies in their halls had at that time. There was no cheese making in the valleys at that time. The aroma of mountain herbs and grasses contributed not little to the goodness of the milk. It was also not believed for a long time, so that you can make delicious cheeses in the valley as in the halls. The milk was mostly in summer, for in the winter the cattle returned to the valleys, where it must have survived until spring.

Back then, stocks of cheese were made for the winter, therefore they were made durable, it was even dried up, so that a few were preserved, even several dozen years. They became grating cheeses, for planing with a planer like gruyere de rayon, sbrinz i inne. In those days, not so much attention was paid to the eyes in cheeses, because they were not matured into a greenhouse Anyway, perforated cheeses are more difficult to store and dry than non-perforated cheeses. All the cheeses were matured all the time in a cool ripening room. However, over time, more and more began to be required, beautifully arranged meshes in the cheeses. Noticed, that without cultivating them in the greenhouse they will not be created. Heat maturation began first in the Emmental Valley. Here, too, the technique of making cheese has improved more than elsewhere, which has come to perfection. As a result, the technique of producing Emmental cheeses was developed. In the French part of Switzerland and in other mountainous regions of the Alps, no greenhouses were established and there was no intention to produce large meshes in vertebrate cheeses.. It made, that the cheeses there retained their original properties more than the Emmithian ones. Without fermenting in heat, they do not acquire the sweetish taste so characteristic of Emmental cheeses, although they always have a slightly nutty flavor. But not only gruyere, sbrinzoraz other rustic cheeses for grating, but also Italian Parmesans in their technical details resemble the cheeses made in the past.

Influence of the perfect technique for the production of Emmental cheeses, constantly supported by scientific research, has had, and continues to be, a significant influence on the improvement of cheese-making techniques in other countries.