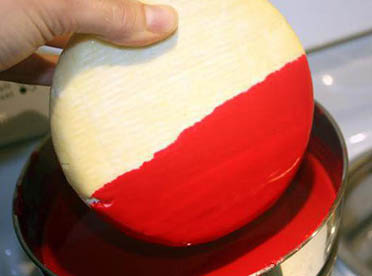 The oldest way to preserve cheeses is to dry them. However, from among the ripened cheeses, only the species intended for grating can tolerate them, and only then, when they reach appropriate maturity. Curd cheeses, which do not ripen like lumps, can be dried off without any preparation. In this way, the people preserved cheeses from the earliest times. In my memory, before consumption, the cheeses were processed into small pieces of dryness with an ax (Pomerania and Masuria).

Newer methods of cheese preservation include grinding the cheese into flour and storing it in airtight cans.. Fatty cheeses will not become rancid, as it does not protect the fatty milk powder, but rather it speeds them up. Cheese melting, as combined with pasteurization, it also belongs to fixation as well as freezing, so that the cheese can be stored for a long time.

It is also appropriate to consider the paraffinization of cheeses. It has a twofold purpose: protecting cheeses from contamination from the outside and facilitating care, the internal maturation process continues. In this case, only the surface of the cheese is preserved. Due to the paraffinic insulation, the loss of moisture during the entire maturation period is reduced by approx 75% compared to unrefined cheeses.

Only hard cheeses with a clean rind and convenient for use, e.g.. edamskie, Gouda, port-salut, Trappists, etc.. However, soft cheeses cannot be paraffinated, as well as cheeses, which release liquid when salted, that is, as long as strong permeation lasts.

Clean, White, unscented paraffin is melted and heated to 140 — 150°C. Using cooler paraffin will not completely destroy the song, which then develops under the paraffin coating, especially in places where the coating is damaged. If a cauldron with a hearth is used to melt paraffin, there should be a lid tightly covering the cauldron at hand, so that the paraffin can be extinguished, if it caught fire.

The cheeses are immersed in hot paraffin with a wire stick twisted with a string, so that the heated wire does not impress the cheese flesh. Depending on the boiling temperature, the cheeses remain in it 5 do 15 seconds - the shorter the higher the temperature - then they are held for a while above the boiler to drain and concentrate the coating. The flat cheeses are put in an inclined position during the bath.

Long-used paraffin becomes contaminated with burnt cheese residues. We purify it like this, that the molten is poured into a conical vessel to accumulate sediment at the bottom, which scrapes off, when the paraffin has solidified.

Store the paraffinated cheeses in a dry room, as it inhibits the growth of mold, even if only on top of the paraffin, which you wipe off from time to time with a soft cloth. Cheeses with damaged coating or with mold, which would appear on the cheeses underneath it, can be paraffinated again.

Young paraffinated cheeses are turned over every second or third day, older from time to time. For cover 100 kg of cheese will need approx 250 do 350 g of paraffin depending on its temperature and the smoothness of the crust.

Smooth-skinned cheeses are also protected from drying out in a long-known manner, rubbing them with linseed oil or giving them to soaked blisters, which, when dry, adhere tightly to the cheese.