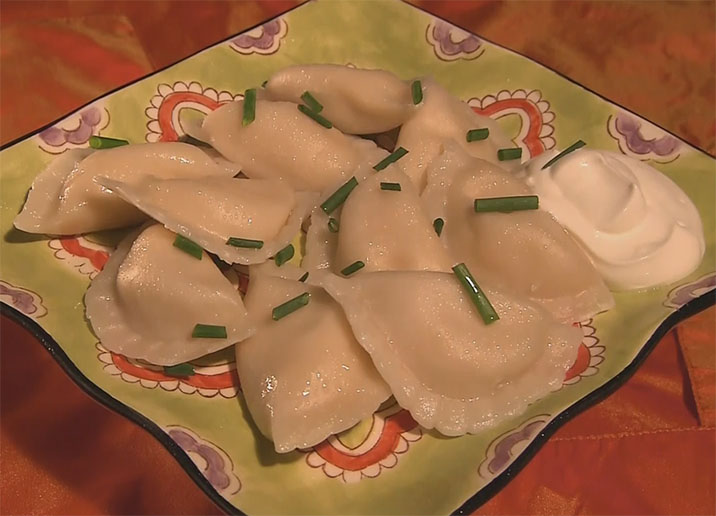 Russian dumplings made of ready-made dough

From breakfast I was left with cottage cheese with onions, salt and pepper. From lunch, as usual, some mashed potatoes. I don't like throwing food away, So I mixed both ingredients and I had dumplings stuffing similar to the so-called. Ruthenian” I used ready-made dumpling dough rings and I did quick lunch for tomorrow. Sparingly, tasty and fast. I recommend!

Dumplings with meat from ready-made dough

If you have meat left from the cooked soup, is it poultry, beef or pork, you can use them for the second course, which will be dumplings. Finely chop the onion and fry in oil until golden brown. Grind the meat together with the onion. Pour in the oil for frying and cook until smooth. Remove the packaging from the freezer ready-made dumpling dough rings. Cut the packaging, take it out ready discs and spread them on a floured pastry board or a breadboard. How they thaw a little, multiply them by removing the disc from the paper. When they are completely thawed, you can form them by hand or with a roller. Then put the stuffing, glue and cook. Your dumplings don't have to contain buns or other fillers. Let them contain it, what you put in them. Dumplings with meat are very tasty deep-fried.

Recipe for stuffing with cabbage and dried mushrooms

Boil the sauerkraut in a little water until soft. Drain the water. Boil the dried mushrooms with the vegetables after they have been soaked. The stock can be used for soup. Chop the onion finely and fry in oil. Pass the mushrooms, cabbage and onions through a grinder. After mixing, Fry the whole mass in oil until the water evaporates. Finally, add salt and pepper and prepare quick dumplings using ready-made dumpling dough rings. Pride!