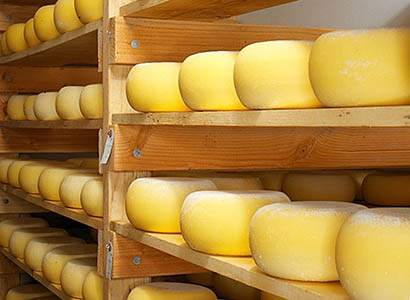 Characteristics of the group. As among hard cheeses, the most important is Emmental cheese, so, between the soft ones, priority should be given to camembert and brie cheeses. Outstanding these cheeses are the main representatives of a range of soft blue cheeses, which are distinguished from other groups by the distinctiveness of the microorganisms involved in the maturation process and by different properties. In the course of maturation, we can see the symbiosis and metabiosis of microorganisms and factors influencing the disturbance of this harmony.

The technical side of the product is easy, straight, while the bacteriological part is more difficult, because it is very sensitive to the slightest shortcomings and shortcomings regarding the chemical composition of cheese as a nutrient for microorganisms.

There is almost no curd treatment, and the excess of whey, and with it sugar and lactic acid, drains mainly due to the self-shrinkage of the curd, supported by its porosity and appropriately selected temperature. The clot is still quite contractile at 18 do 20°C. The milk sugar is transformed rapidly at this temperature. Therefore, the above-mentioned ambient warmth should be maintained throughout the dripping of the cheeses.

Some porosity and shrinkage of the clot, and later you will get a dripping cheese, if mature milk was used. So camembert requires 0,20 do 0,22% the acidity of the milk at the time of renneting it, brie - slightly less. This is where the stands lead, or else you use leaven from pure lactic acid bacteria cultures, if the milk is pasteurized or completely fresh.

The maturing process for this group of cheeses is broadly as follows.

Already during the formation process, the transformation of milk sugar under the influence of lactic acid bacteria begins, and when the cheeses have lost a sufficient amount of whey due to dripping and moderate saltiness, they cover the surface with lush and very active mold vegetation. The only thing that is noticeable with the naked eye is white mold bloom on the seventh or eighth day counting from the product, so when the cheeses are in the dryer. However, much earlier, before the mold appears, other microbes proliferate on the surface, namely, mycoderms, between which there are several varieties and oidia, among them the desired Oidium camemberti, common mold in all French cheese dairies, making soft cheeses. Mycoderma and oidium develop simultaneously. They create a white coating on the dishes in the cheese room, especially on mats, where they appear as a white fluff already when the whey is drained. However, Mycoderma casei prevails, which multiplies more than oidium. Its presence feels like a greasy coating on the cheese that sticks to the finger. At first, the raw cheese appears moist and turns slightly white (but it doesn't take long). Then white mold grows from the surface, whose threads weave into the coating created by Mykoderma and Oidium. The surface of the cheese becomes dull at first, then it blooms into a white velvety bloom of mold, which, when it matures, It often takes on a greenish-blue shade. According to Maja, the correct white mold on camembert and brie forms primarily Penicillium album, whose spores are greenish-blue in color, especially on the acidic substrate. On the other hand, Penicillium candidum develops on bondon cheese and its varieties, which does not change its color. Contrary to Maja, Roger considers Penicillium candidum to be the actual mold of Camembert and Brie cheeses. Both varieties are also called Penicillium camemberti. Penicillium candidum creates a mushroom flavor, Penicillium album - nice delicate fragrance.

A trained eye can clearly distinguish the gradual development of these various species of microbes, which take part in the maturation of the cheeses simultaneously or consecutively, from which it is possible to conclude about the direction of their chemical work. As long as only lactic acid bacteria are active in the cheese, it has a pleasant scent of fresh butter. The impure won command, that there are undesirable microbes in the cheese and that it will be defective. The smell of fresh butter is fading away, when Mycoderma and Oidium form a sticky coating. Instead, there is now a characteristic smell of ripe apples. The fragrance should be pure and without any shades; it comes from mycoderm produced ethyl acetate. The smell of pears heralds the presence of butyric acid, which is an inauspicious announcement. When after 7 days from the product, white mold will appear, the scent of the fruit disappears, however, there is a distinct mildew-like mushroom-like smell. All these fragrances in succession are valuable clues to the purity and integrity of fermentations taking place in raw cheese..

These three species of microbes, which so far form the cheese coating, they mainly feed on sugar and lactic acid, and when they unfold them, they also process proteins. If the human hand did not bring order here, protein, and also fat to some extent would do the same for acid and lactic sugar to that extent, that in the end, instead of the cheese, there would only be two rinds made of mostly mold. Molds break down proteins and fat much more than bacteria. Therefore their activities must be stopped in due time. The cheese maker first weakens them by taking away their moisture. This is the actual purpose of drying the cheeses in the dryer. Then, the mold opposes the antagonists in the form of bacteria, which can develop freely only after proper preparation of the environment by molds and weakening them. The most appropriate moment is, when all the milk sugar is broken down. Then the cheeses dry in the drying room, which stimulates moderation, above all, Oidium and Penicillium. First traces of red appear slowly - rouge between the mold. Red is not yet sufficient evidence of good quality cheese, is only one of the conditions, because exquisite cheeses must be red. According to Maze, it is produced by a group of microorganisms common to Camembert cheeses, brie i coulommiers.

Although the listed groups of microorganisms Penicillium camemberti (I Candida list) + Oidium camemberti + red bacteria are common in some parts of France, after all, disturbances in the normal course of blue cheese maturation occur there quite often, because it depends on various factors. These disruptions are either due to the absence of one of the molds mentioned, either from their weak or too strong development at a certain stage of adolescence, or because of the absence of red bacteria.