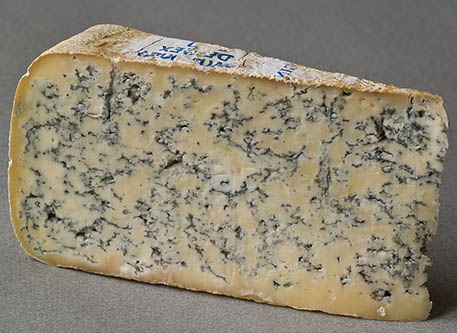 Fromage bleu is an imitation of roquefort cheese, which is made in France from cow's milk. We'll deal with it later. The gorgonzola is related, sassenage, septmoncel, style-tone. They are made of cow's milk, some of them with an admixture of sheep or goat. The presence of Penicillium roquefort is a precondition for the proper maturation of these cheeses, which are sown either by themselves or through cultures. Fromage bleu - blue cheese (France)

The mimics of roquefort cheese made from cow's milk are known as blue cheese. They are generally not as great as the original ones, however, skillfully crafted, they are similar to roquefort cheeses. The same rules must be followed when making these cheeses, which we got to know while discussing the production of Rocforce cheeses from sheep's milk, but other properties of the raw material must be taken into account.

The milk is seasoned with temperature 29 do 30°C. It takes approx 50 minutes. A suitable clot is firm, almost hard. Then it is cut into pieces the size of approx 1 cm3, takes short breaks several times, will drain the whey produced, finally it pours into a box lined with linen and rubs it lightly.

After such preparation, the cheese mass is applied to the molds in layers, sprinkles with bread mold, he does the same at all, as in the Rocforce technique.

Hand lever devices are used for piercing. In France, these cheeses are cultivated in cool natural grottos, however, cool cellars of an appropriate size are also suitable for this purpose, humidity. These cheeses still tolerate a temperature of 15 ° C in the cellar. Where there are no such cellars, there, the production of this species should be discontinued in the summer. Nursing is limited to keeping the temperature in the basement 10 up to 12 ° C and a humidity of 90 do 95%. Mold that appears on the surface must be carefully wiped off. There should also be no dry crust or crust, which would keep air out of the cheeses. To this end, the cheeses are wiped on the surface from time to time with a steel brush.