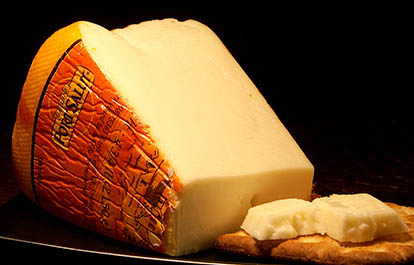 The cheese of this name was first made in the Trappist monastery in Port-du-Salut (dep. Mayenne). It is also known as gautrais, reblochon, rangiport, and here it is called Trappist cheese. It has the shape of a disc in diameter 18 do 25 on 4 do 4,5 cm in height, weighs 1 do 2 kg. The choice of height for hard cheeses is not perfect. Port-Salute matures evenly throughout its mass, so it belongs to hard cheeses, but its flesh is elastic, almost soft. The production technique is Swiss.

The port-salute is made from whole or partially harvested milk, but only that, so that there is still at least 3% fat. Usually, the cream from the evening milking left on the stand is collected and mixed with the whole milk from the morning milking.. It does too, that the milk acquires the desired rage and acidity, which is 0,18 do 0,19%. Renneting the milk takes place at 30 up to 35 ° C, depending on the season, the acidity of the milk and the desired consistency of the cheese. Paint adds so much, so that the ripe flesh is the color of oat straw. Coagulation continues 30 do 40 minutes.

As soon as a curd of medium hardness is obtained, the top layer is turned over with the trowel and allowed to rest for a few minutes. Then it is cut with a harp, initially slowly, then faster, by the time 10 minutes to get a grain of the size of a pea or even finer, when it comes to making a more durable cheese. During cutting and combined mixing, the cheese mass is usually dry enough, that it will not clump together within the 10-minute break, which is now taking place. If, however, the grain was too moist, they still need to be mixed and only after they have dried properly, take a break. The drying quality of the grain is tested in the same way as for Emmental cheese; the grains should be uniformly moist throughout, no gelatinous kernel, and when squeezed in handfuls, they should not merge, but to be ground again into separate grains.

After the break, the contents of the boiler are vigorously stirred, to break down the cheese mass as accurately as possible and start reheating in sequence 10 do 15 minutes to 33-40 ° C. The heated mass is stirred for more 5 do 10 minutes. During this period, the grains will shrink to the size of a wheat grain, and when squeezed in handfuls they merge lightly and can be rubbed together, are properly prepared. Then a few energetic ones are performed, concentric agitator movements and leave the contents undisturbed for a few minutes, so that the cheese mass can collect at the bottom of the cauldron. Once this happens, the whey is drained until the lump of cheese is exposed.

The cheese mass prepared in this way is put on the molds lined with scarves with a scoop. Tinplate, the punched forms are rim-shaped. A small format for weighing cheeses 1 do 1,20 kg ma 18 cm in diameter and 4 cm in height. Large format for weighing cheeses 22,5 kg is 25 cm in diameter at 4,5 cm in height. The molds are sufficiently filled, when pressed with hands, the cheese mass protrudes by 1 cm above the top edge. Now the ends of the scarf are put on the top of the cheese smoothly and covered with a thick one, with a wooden disc, the diameter of which is approx 3 mm smaller than the mold diameter, thanks to which it moves freely in it as it does, as the cheese mass descends. The capped cheeses are placed under a series of small Foulche system lever presses. Normal ones are also well suited for this purpose, wooden Dutch presses, which we use to press Edam cheeses. We increase the pressure starting with 5 kg, and ending with 15 kg in 1 kg of raw cheese. Cheese remains under the press 6 hours, and when the pressure is weak, even longer. During this time, the scarves are changed and the cheeses are turned several times, namely, three times within the first hour, twice within the second and once after the third hour.

Cheeses removed from the press remain in their molds until the next day, then they are salt. In the Abbey of Port-du-Salut, the cheeses were salted by 15 do 20 days, wetting them daily with a saline solution. This way undoubtedly contributes to this, that the cheeses mature slightly differently and remain slightly softer, than salted immediately. Currently, salting is carried out by one strong rubbing of the cheeses with dry salt. Salting should be moderate, so that the absorbed salt content should not exceed 2 do 3%. In France, the salted cheeses are first placed in a dryer, where they stay for so long, until a delicate one forms on them, yellow peel. In our climatic conditions, it is sufficient to cultivate in a moderately moist basement (85%). From the drying room, the cheeses are transferred to a wetter cellar (90%), wherein, stacked on wooden shelves, they mature at temperature 12 do 13°C.

The original port-salute cheeses should remain smooth, clean rind like Swiss cheeses. Therefore, they need to be washed frequently and wiped dry, to prevent the growth of mold or goo. During the first week of cultivation in a moist ripening room, the cheeses are washed every other day with a weak salt solution, later less and less, the cheeses are always turned to the other side. Shortly before shipment, a weak orelate solution is rubbed into the cheeses, thanks to which the skin looks nice, yellow tint. The scratched skin should be lightly greased with oil, which protects the cheese from molding inside. The cheeses are ripening 6 do 8 weeks, but very often already four-week-olds are sold.

The correct original port-salute has a delicate skin, yellow, kept dry, no shell or gooey. The flesh of the mature cheese is elastic, quite soft, delicate, the color of oat straw, and equally distributed throughout, no stitches or only few regular buttonholes. The taste is mild, resembling Gouda cheese. The yield of port-salut when ripe is approx 9 kg of 100 liters of milk.

After the abolition of religious congregations in France, the Trappists moved to Banialuk, Bosnia, where they continued to make this cheese under the name of Trappist cheese.